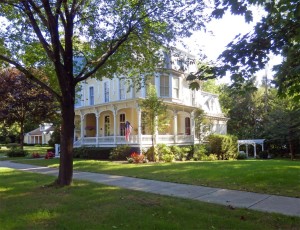 Built in 1877, 688 North Broadway was most likely the first spec house built in Saratoga Springs by Abram Viele and John Darrow. It was sold in 1879 to Carrie Hamilton, who worked at Dr. Hamilton’s Medical Institute located at that time at 44 Franklin Street. Built as a summer cottage, for decades it was only occupied in the summer months.